Finding an object of interest in the night sky is not always as simple as grabbing the nearest star chart and comparing by eye. Roving objects such as planets, asteroids and comets are not shown on star charts because they move around. Dimmer or diffuse objects such as nebulae or star clusters must be viewed with binoculars or a telescope, which presents a smaller field of view and reveals many dim objects too dim to see with the naked eye. Locating an object of interest in this confusion can be difficult unless one prepares beforehand. 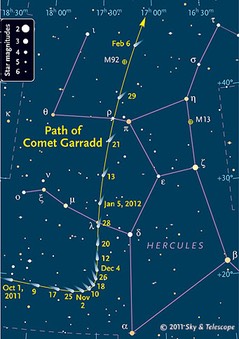 This is where a finder chart comes in. A finder chart is simply a rough map of a small region of the sky. This map can be drawn by hand or created using computer software. The chart is often created for a particular date and time of night, with instructions on which direction to look and at what elevation in order to see the desired objects. Alternatively, a roving object can be shown for multiple dates as in the finder chart for Comet Garradd to the left.

The area of the sky covered by a finding chart depends on the objects being looked at and how they are viewed. A finder chart for an object that will be viewed through a telescope should cover a somewhat larger area than the telescope's field of view, so that the pointing of the telescope can be corrected it is off-target. Charts for naked-eye objects will usually cover 2-4 constellations. However, in both cases enough bright stars and/or asterisms should be shown so that the observer can get their bearings in the sky, without being so detailed as to be confusing.