When you observe a star with a telescope, you are actually measuring its brightness, not its luminosity. The luminosity (L) and brightness (B) are related by the Inverse Square Law

We use two magnitude scales to describe the brightness of stars. The first is apparent magnitude, which is what is generally measured with a telescope. The second is absolute magnitude, which is how bright the star would be if it were at a distance of 10 parsec. The two scales are related by

where M is the absolute magnitude, m is the apparent magnitude, and d is the distance in parsecs.

Stars are classified by their temperatures and luminosities. We use the Morgan-Keenan scale for spectral types, categorizing stars into either class “O”, “B”, “A”, “F”, “G”, “K”, or “M”. The spectral class of a star denotes its temperature, with O stars being the hottest and most massive, and M stars being the coolest with the lowest mass. The spectral types of stars are further subdivided using a scale from 0-9, where 0 is hotter than 9. For example, a O8 star is hotter than a O9 star, and both are much hotter than a G0 star. 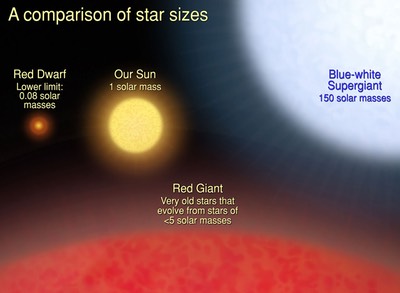