Exoplanets are not a new concept to Astronomy. With the realization that the Copernican model of the Solar System was correct, with the planets in our Solar System orbiting the Sun, some scientists began to wonder if other stars might be like our Sun and if they too could host planetary systems. As telescopes improved, it became only a matter of time before we would find out. Planets were found around a pulsar, a stellar remnant, in 1992. The discovery of the first exoplanet orbiting an actual star, 51 Pegasi b, occurred on October 6, 1995.

Exoplanets are very faint sources, especially compared to the bright stars that they orbit. Because of this, most exoplanets are observed indirectly. Four methods of detecting exoplanets are described below:

The transit method relies on what are best thought of as miniature eclipses. When an exoplanet passes in front of its parent star, it blocks some of the light emitted from the star. The planet must be aligned nearly perfectly for us to see the transit, and so most exoplanets can't be detected by the transit method. From our line of sight, if the planet passes above or below the disk of the star, we miss the 'eclipse'. The majority of the nearly 5000 known exoplanets have been discovered this way, due in great part to the work of the Kepler space telescope. The Kepler mission mostly found planets that orbit near to their stars; the transit method most easily detects planets that are close to their parent stars. This is because transit method telescopes do not observe for long enough to detect very many planets that orbit their star far out (it takes our planet Saturn 29 years to orbit the Sun. It takes Neptune 165! Many large-orbit planets will never pass in front of their star during the observation periods.) The planets discovered by Kepler and other transit method telescopes tended to be at the small orbital distance of the Earth, but were on average larger, giving rise to all planets with these properties sometimes being called 'super Earths.'

The transit method is shown in the animation to the right. A planet orbits around its star, and a telescope records the amount of light seen from the star as it does so. As time passes and the exoplanet passes in front of the star, the brightness detected by the telescope drops down. Only when the planet has finished passing in front of the star does the recorded brightness go back to maximum. The smaller the host star or the larger the exoplanet, the deeper the dip in the lightcurve will be, and conversely, the larger the star or the smaller the planet, the shallower the dip in the lightcurve will be.

The radial velocity method involves watching the spectral lines of a star as a planet orbits the star. Because of the planet's gravitational pull on the star, the star will move in position, or 'wobble'. This causes Doppler shifts in the spectral lines, allowing Astronomers to infer the presence of the planet. This method, like the transit method, is most sensitive to massive planets that are located close to their parent star. It is best if the mass of the planet is high because the radial velocity method relies on exoplanets being large enough to force thier parent star to 'wobble', and the higher the mass of the planet, the more easily detectable this signal is. The planet needs to be close to its star because again most telescope missions aren't long enough to catch many long-period planets. With the objects being found being high-mass objects near to their stars, this lead to any planet with this selection of properties sometimes being referred to as 'hot Jupiters.'

The radial velocity method is shown in the animation to the right. A planet orbits around its star, and a telescope records the spectrum seen from the star as it does so. The spectrum always reports the movement of the star; the spectrum of the exoplanet is too dim to see. As the exoplanet travels first moves toward us, the star moves ('wobbles') away from us slightly, and because of this the spectrum is redshifted (the black absorption lines are toward the red, the right end of the spectrum). As the exoplanet moves in front of the star and then moves away from us, the star wobbles toward us, and the observed spectrum is blueshifted (the black absorption lines move toward the blue or left).

The direct imaging method has been used to find exoplanets in a few exceptional cases. In order to view the exoplanet directly by telescopes, the light from the parent star must be blocked by a coronagraph. Because of this and stellar glare, this method cannot detect planets that are very close in; this method is most sensitive to large planets that are at a relatively far distance.

The pulsar timing method was the method used to make early detections of exoplanets around pulsars mentioned above; one of these planets was named PSR B1257+12 b. The method relies on irregularities in the typically uniform pulses of light emitted by a pulsar, a rapidly spinning neutron stars with jets of electromagnetic radiation (light) pointing toward the Earth. PSR B1257+12 b is one of the lowest mass exoplanet discovered, comparable in size to Earth's Moon. Despite this method's ability to detect very low mass objects, only around 10 planets have been found around pulsars. This is because most pulsars do not have planets as the supernova that forms the pulsar would destroy any planets that orbited the original star. Because of this, it is believed that any planets found orbiting pulsars were formed after the supernova occurred. 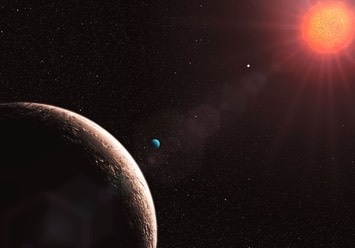