Supernova explosions are the most powerful events in the universe. In less than a second, as much energy is released (about 1044 Joules) as the Sun has released in its entire lifetime! The explosion results from the death of a massive star which has consumed its fuel supply. The apparent magnitude of a supernova brightens by about 10 magnitudes within a few hours, so that for a few months the star’s luminosity is comparable to the luminosity of its parent galaxy.

Supernovae are rare events, occurring only once or twice a century in a typical galaxy. There have been just six supernovae seen in the Milky Way galaxy in recorded history, with the most recent occurring in 1604, just before the age of telescopes began. The perceptive reader will note that this rate is much less than the rate of one or two a century reported above (which gives ~20-40 in 2,000 years). This is because at visible wavelengths, we cannot see very far into the disk of our galaxy due to light extinction by dust. In other words, the six documented supernovae of the last 2000 years have all been relatively close (within 2-4 kiloparsecs). The 1-2 per century rate is based on average detection rates in galaxies other than our own in which we can see the galactic disk ‘face-on’ with little extinction.

Supernovae are classified into two broad categories, based on their light curves (magnitude versus time). Type I’s exhibit a sharp maximum and decay gradually, whereas Type II’s have less sharp maxima and decay more gradually. The spectra of the types also differ. Type II spectra show mostly hydrogen lines, whereas Type I spectra have lines of many substances. The progenitor star of a Type I supernova is thought to be a white dwarf in a binary system with a red giant companion. Mass from the red giant accretes onto the white dwarf until the dwarf’s mass passes the Chandrasekhar limit of 1.4 solar masses. The dwarf then collapses violently and becomes a Type I supernova. The progenitor star  for a Type II supernova is thought be a massive red (or blue) supergiant. After the star ceases thermonuclear fusion, gravity takes over and compresses the star to a very small diameter. This implosion causes a shock which bounces off the core, resulting in the explosion which we see as a Type II supernova. The shock also carries off a large fraction of the stellar atmosphere at speeds of 15,000-30,000 km/sec. 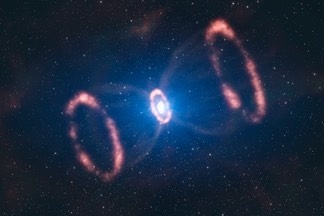 Learning Goals: Students will learn about the nature of supernovae, how to detect them in distant galaxies, and what these observations can tell us.

Challenge: Measure the distance to a faraway galaxy using a special type of supernova. Hunt for supernovae in distant galaxies and perhaps be the first to make a new discovery!