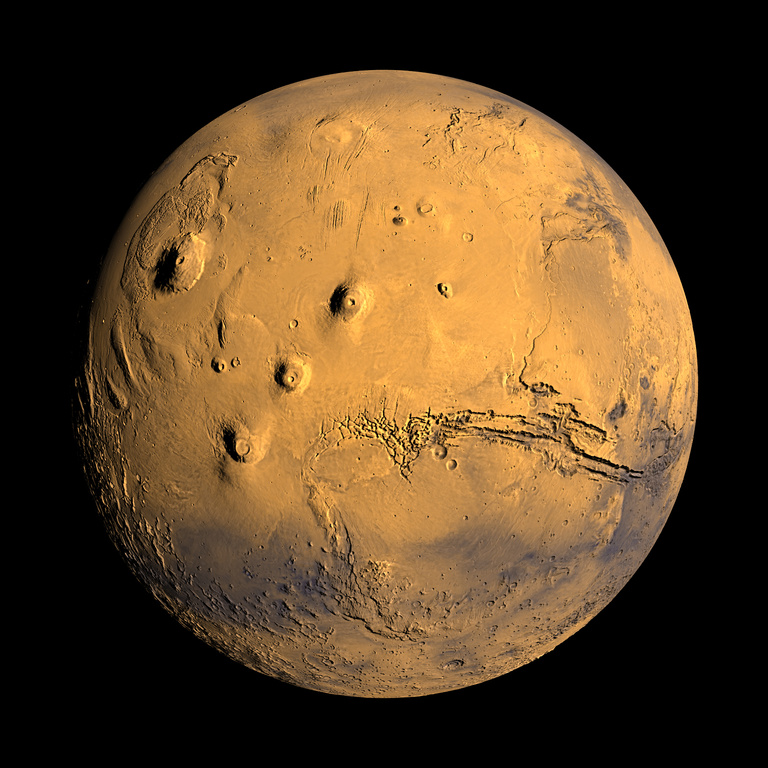 Mars: Earth's nearest neighbor and exploration's next frontier. Perhaps best known for having the tallest mountain and largest canyon in the Solar System (Olympus Mons and Valles Marineris respectively, both seen at right), Mars is the only planet besides Earth known to have liquid water on its surface (though this water is very briny, and only in trace amounts), and is the only planet where scientists remain hopeful microscopic forms of extraterrestrial life could possibly exist. Some planets' moons also have liquid water and the potential for life, but not any other planets besides Mars.

The Martian surface is rocky; in the past, plate tectonics, volcanos, and impacts shaped the planet. Present day Mars has frozen carbon dioxide and water ice north and south polar caps, and is red in color at more moderate latitudes because iron minerals present in the sand, soil, and bedrock there turn these surfaces the color of rust. The Martian climate is variable and harsh; the planet experiences seasons just as we do on Earth and the movement through the year heralds in dust storm winds and the cycling of carbon dioxide and water vapor between Mars' atmosphere and surface.

Learning Goals: Students will utilize real images of Mars to aid scientists' understanding of Mars' surface, climate, and history on the citizen science platform the Zooniverse. Students will gain a better understanding of the Martian landscapes and enviormental processes and practice analysis of scientific images.