Most astronomical cameras are equipped with colored filters to give the user the option to block out all but certain wavelengths of light. These filters can show how bright objects are in different colors, or to look at a specific spectral line of a common element such as hydrogen. In the image below, the Hubble Space Telescope took images of the galaxy NGC 1512 using different filters. In the lower left, you can see the image taken in ultraviolet, then the next five filters, traveling clockwise, were taken in the optical, or visual, regime of the electromagnetic spectrum. Finally, the image on the lower right is taken in infrared. While each image shows different properties and structure of the galaxy, all the images are often combined to produce a single image, such as the one seen at the center image of this graphic.

While having a multi-color image is both helpful to understand properties of the object and beautiful to look at, we call these images 'false-color' images. The colors don’t represent the true appearance of the object; instead, we have used colored filters to help bring out features. In some of these cases, an atomic transition is being traced, such as by using a hydrogen-alpha filter, which is captured in the red region of visible light. Similarly, green images often represent OIII (twice-ionized oxygen) that has been traced, so when you look at a false color image and see green, you may be seeing the location of ionized oxygen atoms. It is convenient to use colors to map out features, but the galaxy isn’t actually these colors. 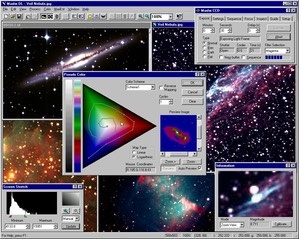 Learning Goals: The goal of this lab is for students to learn how to conduct basic image analysis using the program MaxIm DL, a powerful astronomical image analysis software package (depicted at right). The skills of image alignment, animation, and stacking will be learned using either archival images or the students' own observations requested and obtained using either the Iowa Robotic Observatory's 0.5-m Gemini telescope or the 0.4-m Van Allen Observatory telescope.