Photometry of a Globular Cluster

Temperature of a Star

From observations, astronomers classify the luminosities of stars using the Luminosity Class. The luminosity classes are listed below:

So, the Sun is a G2V star, meaning that it is a main sequence star with a temperature of 5800 K.

Examine the HR-Diagram to the right. You will notice that a range of stars of different luminosities can occupy the same temperature. It’s important to specify the luminosity class and the spectral class for a star, as a K5 star could be a main sequence, giant, or super giant.

When you observe a star with a telescope, you are actually measuring its brightness, not its luminosity. The luminosity (L) and brightness (B) are related by the Inverse Square Law

We use two magnitude scales to describe the brightness of stars. The first is apparent magnitude, which is what is generally measured with a telescope. The second is absolute magnitude, which is how bright the star would be if it were at a distance of 10 parsec. The two scales are related by

where M is the absolute magnitude, m is the apparent magnitude, and d is the distance in parsecs. 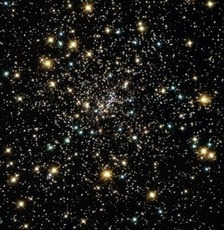 Learning Goals: Students will learn how astronomers accurately measure the brightness of stars, as well as how the flux of a star through different colored filters can reveal its temperature. They will then use the brightness and temperature of stars to make inferences about their properties.

Suggested Observations: B, V image of an evolved open cluster such as M67

Challenge: Your team will take images of an open cluster - a group of stars that formed together at roughly the same time. You will measure the apparent magnitude of several stars and calculate their surface temperature.