Asteroids are rocky or metallic bodies that orbit the Sun and are generally smaller than most moons.  They are found throughout the Solar System, with a higher concentration between the orbits of Mars and Jupiter, and a likely much larger number past the orbit of Neptune. These objects are most likely remnants from the formation of the Solar System that were not absorbed by the large planets as they formed. Thus, a better term for these objects as a whole is "minor planets", while "asteroids" has come to refer specifically to the objects orbiting between Mars and Jupiter. 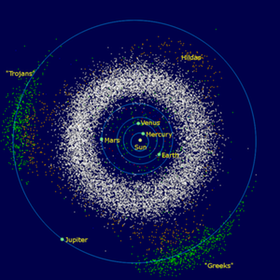 The physical composition of asteroids is varied and in most cases poorly understood. Ceres appears to be composed of a rocky core covered by an icy mantle, where Vesta is thought to have a nickel-iron core, olivine mantle, and basaltic crust. 10 Hygiea, however, which appears to have a uniformly primitive composition of carbonaceous chondrite, is thought to be the largest undifferentiated asteroid. Most of the smaller asteroids are thought to be piles of rubble held together loosely by gravity, though the largest are probably solid. Some asteroids have moons or are co-orbiting binaries: Rubble piles, moons, binaries, and scattered asteroid families are believed to be the results of collisions that disrupted a parent asteroid.

Albedo is a measure of the percentage of light that an object reflects. Specifically, the geometric albedo is a measure of the reflectivity of an object when the source of light is directly behind the observer - like when viewing an asteroid at opposition. Albedo is measured on a scale of zero to one, zero representing a surface that reflects no light, and one representing an object that reflects all incoming light. Asteroids typically have very low albedos, and many cannot be seen without the use of binoculars or a telescope.

Impact craters are the dominant landforms on many solid Solar System objects. Although the Earth’s active surface processes quickly destroy the impact record, about 170 terrestrial impact craters have been identified. These range in diameter from a few tens of meters up to about 300 km, and in age from recent times (e.g. the Sikhote-Alin craters in Russia whose creation were witnessed in 1947) to more than two billion years.

Impact cratering involves high velocity collisions between solid objects, typically much greater than the velocity of sound in those objects. Such hyper-velocity impacts produce physical effects such as melting and vaporization that do not occur in familiar sub-sonic collisions. The velocity of impacts on Earth range from 11 km/s (escape velocity) to more than 70 km/s, with the median impact velocity on Earth being about 20 to 25 km/s.

In impacts at these speeds, both impactor and the material impacted are rapidly compressed to high density. Following initial compression, the high-density, over-compressed region rapidly depressurizes, exploding violently. Since craters are caused by explosions, they are nearly always circular – only very low-angle impacts cause significantly elliptical craters. The impact process is divided conceptually into three stages: (1) initial contact and compression, (2) excavation, (3) modification and collapse.