The moon is the most notable object in the night sky and has been an object of scientific study for most of human history.  As far back as 500 B.C., the cycle of lunar and solar eclipses were understood. Ancient Astronomers also reasoned that the moon was a sphere and did not shine on its own, but rather reflected light from the sun back to Earth. It wasn't until the time of Galileo though that lunar mountains and crater were discovered.

The Moon remains the only celestial body that mankind has set foot on. Although the Apollo missions from the 1960s and 1970s left behind several pieces of equipment on the Moon, evidence of mankind's visit to the Moon can not be seen from Earth. It was not until 2011 that we were able to observe the moon landing sights once again using a satellite orbiting the moon.

Even today, our understanding of the Moon continues to evolve. Within the last decade, The United States, Japan, China, and India have all sent probes to the moon, providing a wealth of data and images of the Moon's surface. 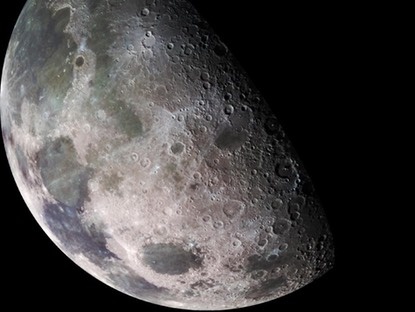 Learning Goals: In this lab, students will study the moon in detail by observing and characterizing some of its surface features.  The moons features will be examined with both naked eye telescope observations and with photographic images.

Suggested Observations: A very short exposure image of the Moon, timed so that the Earth-Moon-Sun angle creates long shadows in the Moon's craters.

Challenge: Observe the moon though a telescope and identify lunar features using a lunar atlas.