Star charts (constellation charts) and particular software programs are literally maps of the sky. We use them for a number of purposes, such as telling us what time of night certain stars and constellations will be visible, plotting the positions of the Sun, Moon, and planets against the background stars, and locating non-stellar objects such as nebulae and galaxies.

Learning about star charts and relevant software is important because these resources introduce a coordinate system and other methods for locating all of the interesting objects we will discuss this semester. These charts and programs also help convey important terms and concepts such as the celestial equator, the ecliptic, and the Sun's changing position in the sky.

Just as you can describe your position on Earth with GPS coordinates of latitude and longitude, you can describe the position of any object in the night sky with numbers. We call these numbers Right Ascension and Declination. The 24 lines of Right Ascension (the analogue of longitude) are vertical lines that cross the sky from the north celestial pole to the south celestial pole, perpendicular to the celestial equator. The lines of Declination (the analogue of latitude) are lines that arc across the sky parallel to the celestial equator. Together, Right Ascension and Declination create a grid on the sky on which any celestial object can be located.

Right Ascension, often abbreviated RA, is measured in hours, minutes, and seconds (h, m, s). There are 24 hours of RA, with each hour of RA encompassing 15° of the 360° sky. Declination, often abbreviated Dec, is measured in degrees, minutes, and seconds (°, ', ''). Dec spans from 90° at the north celestial pole down to -90° at the south celestial pole.

How the Sky Changes Throughout the Year

Though for the most part the Earth turns below a stationary, unmoving sky, because the Earth orbits the Sun (our source of night and day), what can at night be seen of the stationary sky changes throughout the year. Additionally, as the Earth orbits the Sun, the Sun is superimposed on the sky at different locations throughout the year (see the animation to the left). During the day, the sky appears bright, but there are constellations back behind the Sun in the daytime, washed out by the scattering of sunlight by Earth's atmosphere.

Examine the diagram below to explore how the sky changes throughout the year, as the Earth orbits around the Sun. It may help to envision yourself standing on the Earth (which you are) at each location of the Earth around the Sun below. At nighttime, the Earth turns you away from the Sun. At what RA are the stars you can see? During the daytime, when you're turned toward the Sun at what RA has the Sun been superimposed into? 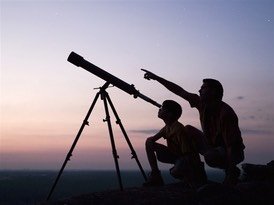 Learning Goals: The goal of this lab is for students to familiarize themselves with charts and software used for studying the sky, which may be used throughout the semester.