Observing the Sun With VAO

The Sun is an almost perfectly spherical ball of hot plasma interwoven with magnetic fields. It has a diameter of about 1,392,000 km, about 109 times that of Earth, and its mass (about 330,000 times that of Earth) accounts for about 99.86% of the total mass of the Solar System. Chemically, about three quarters of the Sun's mass consists of hydrogen, while the rest is mostly helium.

The Sun's interior consists of an inner radiative layer which rotates rigidly and an outer convective layer which rotates faster at the equator than at the poles and in which heat is transported by bulk circulation of plasma. This convection is evidenced on the surface by granulation - patterns of light and dark spots indicating rising and falling gas. The interaction between the radiative and convective zones in the Sun produces strong magnetic fields that become wrapped and twisted by the differential rotation of the convective layer. This causes field lines to protrude from the Sun's surface and to break and reconnect, leading to many active surface features.

Active regions of the Sun come in a number of varieties, such as sunspots, flares, and prominences. All active regions have large magnetic fields. Sunspots have stronger magnetic fields than the rest of the Sun's surface, which slows convection making them somewhat cooler and causing them to appear darker than the rest of the Sun. In some regions the magnetic field becomes so tightly twisted that the field heats the plasma. This energy is released as bright flares. Prominences are regions of cool gas in the corona of the Sun. When seen against the disk, these appear as dark filaments, but when seen above the Sun's limb, they appear as arches of glowing gas. Coronal mass ejections are caused by the eruption of prominences, and are blasts of gas which move out through the Sun's corona into the rest of the solar system.

Recently, there was a mid level solar flare on Oct 1 2015. The LASCO camera on SOHO captured the event. You can search for the movie here. On July 23 2012, there was a large coronal mass ejection, the largest in recent history. Tracking solar flare events is extremely important because extreme space weather events can have consequences on Earth. On the benign side, coronal mass ejections produce aurora. You can see aurora predictions on NASA’s Space Weather website as well as other important information. Coronal mass ejections that are directed at the Earth can cause geomagnetic storms on Earth, which can have the potential of disrupting communication systems on Earth or worse. Historically, the largest geomagnetic storm that the Earth has experienced was in 1859, which is known as the Carrington Event. The coronal mass ejection induced currents in the telegraph lines across the US, which caused fires at telegraph stations. The storm was so intense that telegraph operators could still send messages despite disconnecting the lines from power supplies. If such an event were to hit the Earth today, it could disable most of our communication across the globe and cost billions of dollars of damage. 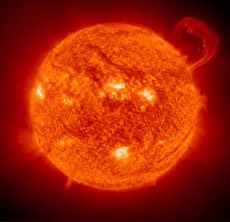 Learning Goals: After completion of this lab, students will have:

- Developed an understanding of the five major surface features of the sun, including the physical processes involved in these features.

- Properly assembled a personal telescope, and used it to safely observe the Sun.