The Small Angle Approximation for trigonometry states that: 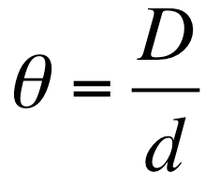 which is called the Small Angle Formula, where again θ must be an angular size in radians.

θ is in units of radians, but we will sometimes have angular size measurements in units of degrees. Using the fact that 1 radian is 360/2π ≈ 57.3 degrees, we can rewrite the Small Angle Formula so that θ can be input as an angular size in degrees:

When dealing with astronomically distant objects, angular sizes are extremely small, and it is often more practical to use angular size measurements in units of arcseconds (") instead of degrees, where 1 arcsecond is 1/3600th of 1 degree.  So 1 radian is (3600 x 360)/2π ≈ 206265 arcseconds, and we can again rewrite the Small Angle Formula, now as:

On August 27, 2003, Mars made the closest approach to Earth in recorded history due to a near synchronization of Earth being at aphelion (the furthest point out in its orbit around the Sun) and Mars being at perihelion (the closest point to the Sun in its orbit around the Sun). The distance between the two planets that day was a mere 55.8 million km (kilometers). Observations of Mars were quite easy to make that night, since the angular diameter of the planet was quite large at about 25.1" (arcseconds). Given the information here, find the diameter of the Red Planet in km.

Mars' diameter D is about 6790 km, a little more than half the diameter of Earth.