Instead, sometimes the distance d is known but the physical size D is unknown. In these cases, the formula can be rearranged to solve for D as a funtion of d and angular size θ in arcseconds: 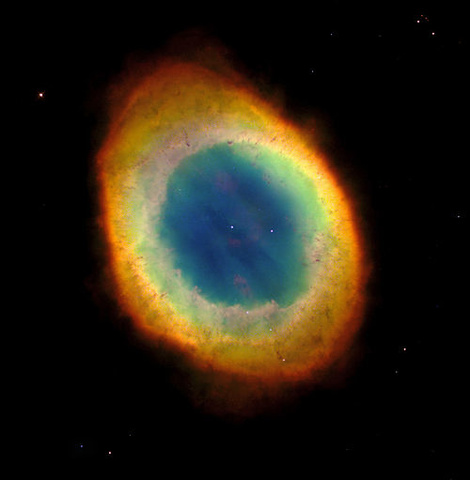 M57 is a planetary nebula: a dead red giant star that sloughed off its outer layers as gravity finally won the billion-year-old battle of outward fusion pressure against inward gravitational force, collapsing the star into a white dwarf.

The dead star at the center, which has a temperature of a temperature of 100,000K, still emits light. And the ejected red giant atmosphere is still traveling outward at a rate of about 30 kilometers per second (km/s). The Ring Nebula was discovered in the 1770s and remains one of the most recognizable objects in the night sky. The diverse array of colors are from ionized atoms giving off radiation (light). The colors are stratified in rings because of the fact that different distances from the white dwarf experience different local temperatures. Close to the star it might be hot enough to ionize one type of atom, but further out it may only be hot enough to ionize a type of atom that requires less energy. Blues represent the prescence of helium, greens represent the presence of oxygen, while reds represent the presence of nitrogen.