The diagram above shows the primary phases of the Moon. In this setup, the Sun is off to the right. The cartoon at the center shows the physical positioning of the Earth and Moon relative to each other (and the Sun) at the time of each Moon phase. The outer circle of images show what the Moon looks like during each phase for an observer on Earth in the Northern hemisphere. To start, when the Moon appears in the New Moon phase, the Moon is in between the Sun and the Earth. Sunlight falls on the Moon, but those on Earth cannot see any of that light. The Moon orbits counterclockwise around the Earth as seen from space looking down on the north pole of the Sun, Earth, and Moon. As it does so, some of the lit half of the Moon begins to be able to be seen on Earth, appearing on the right hand side. This phase is called Waxing Crescent (waxing meaning 'growing larger'). 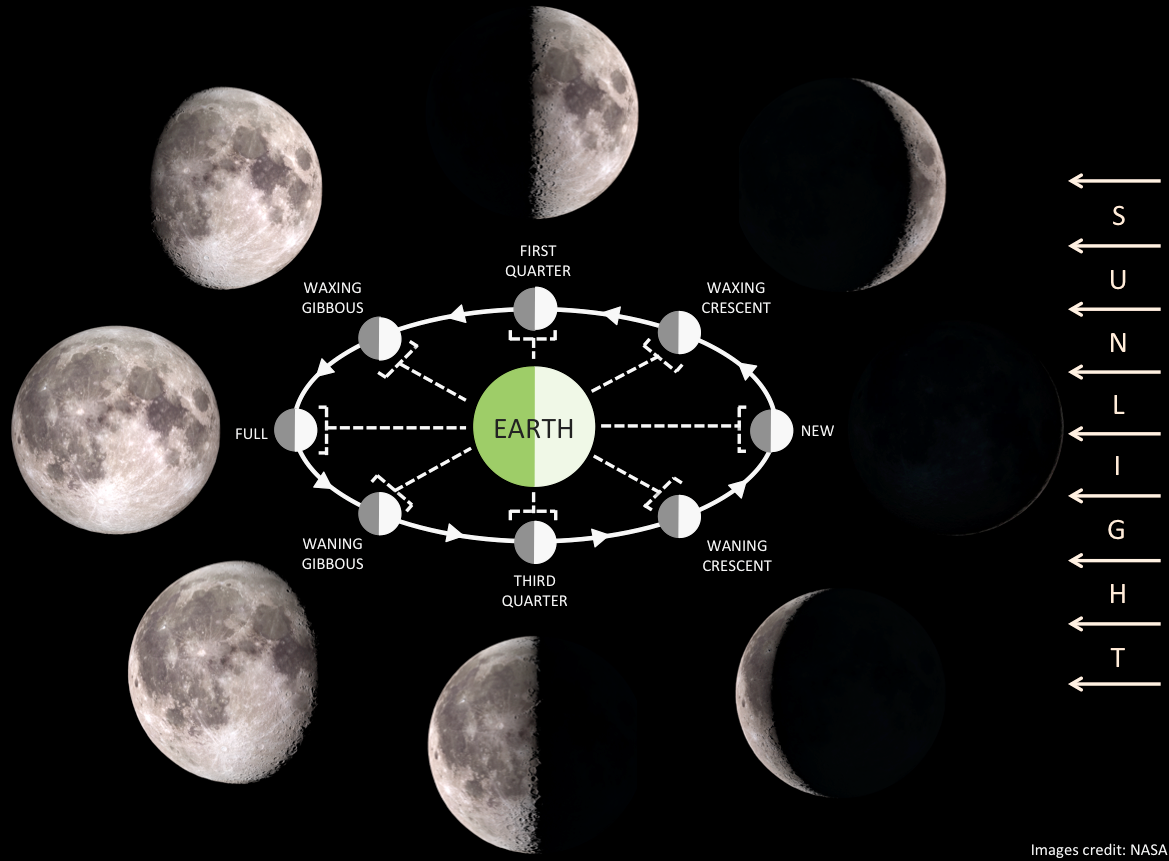 It is possible to understand the time at which each phase of the Moon will rise, set, and be at its highest in the sky (on the meridian) without having to memorize those details; this is done by thinking about the positions of the Moon, Earth, and Sun relative to one another during different times of the month as well as thinking about what sunset, sunrise, and having something high in the sky physically mean in terms of the Earth's orientation in space. However, charts of rise, set, and meridian crossings for each phase of the Moon can be readily accessed when needed:

The lunar month (the synodic month, the time it takes to complete a full lunar cycle relative to the Sun (from New Moon to New Moon or Full Moon to Full Moon, etc.)) is around 29.5 days, making it slightly longer than what we call a sidereal month, the time it takes for the Moon to complete the 360o journey around the Earth (complete an orbit around the Earth relative to the background stars). This sidereal month is about 27.3 days long. This difference is because as the Moon orbits the Earth, so too the Earth orbits the Sun. The lunar cycle always has to do some catch-up and travel a bit more than 360o to get back to the phase it started at.